A few years ago, during my studies, I became interested in baroque music. I had the chance to discover the pleasure of performing numeruous works of instrumental music of that period. In each cultural centre of Europe in 16th and 17th centuries, composers created works in different styles, but still with many elements in common. This is why performing pieces by Vivaldi, Bach, Leclair,Graun, Ragazzi and many others, is so exciting. Especially, I enjoy working on sonatas for violin and basso continuo: from early Italian ones (works by Pandolfi Mealli, Fontana), German and Austrian (pieces by Franz and Georg Benda, Graun, Biber, Schmelzer), to sonatas of the style Empfinsam (composed by the sons of Johann Sebastian Bach).

However, my repertoire is not limited to baroque music. Thanks to many diverse musical projects in which I participate, I have been broadening it continuously. 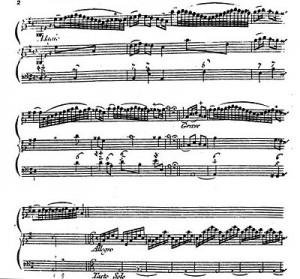 In early music, improvisation plays a crucial role. As in every baroque piece there are numerous ornaments or even visrtuoso cadenzas (ex. the so-called Cappriccios in Italian concertos) which should be improvised, each performance of a given work may be completely different. Improvisation brings life to music and may give to the performer a feeling of creating a part of the musical universe. In order to understand better some principles of improvisation in the previous centuries, I became interested also in jazz music. As an example, you can see on your left side ornamentation written by Arcangelo Corelli himself. Middle part is an original violin part. 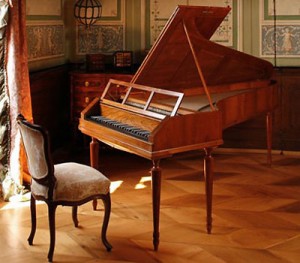 Nowadays, we are used to performing classical pieces on modern instruments. Playing them on historical instruments, both on copies or original ones, is surprisingly interesting, though. Most 18th century pieces, especially sonatas, were meant to be performed on specific instruments, therefore they reveal their beauty only when played, for instance, on a historical pianoforte and a violin with gut strings (which were, by the way, in common use until 1945!).
In modern violin and piano performances, the violin seems overwhelmed by the piano, as the latter has increased its dimensions and its volume for the last 200 years. Playing the violin with the accompaniment of a historical pianoforte (models by Walter, Graf, Pleyel or Erard, depending on the repertoire) is a great solution to the problem of acoustics. 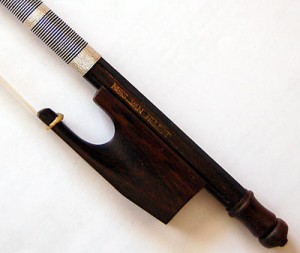 Starting my studies in The Netherlands, I wanted very much to play in a string quartet on period instruments. Very soon I realized that it is extremely difficult to find a baroque violist who would have enough free time to set up a new ensemble. This is why I decided to start to play the viola myself. Learning the alto clef was chalenging at the beginning, but later on it became quite automatic. Performing the ‘middle’ part in baroque or classical chamber music gives me a completely new feeling playing in the group and it is a great experience. 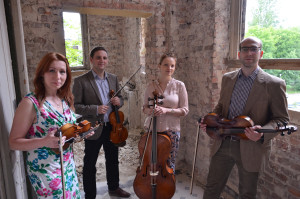 The Fibonacci Quartet is a string quartet founded by alumni of the Royal Conservatoire in The Hague (The Netherlands), Hochschule für Musik und Theater in Leipzig (Germany) and the Karol Szymanowski Academy of Music in Katowice (Poland). The ensemble’s repertoire is focused on the The artists perform performs mainly 18th and 19th century chamber works on historical string instruments, or on copies. The ensemble works in Katowice.

Using historical instruments and learning about the historical performing practice allows the artists to come to the composer’s idea about a given piece as close as possible. Of course, we will never know how close we are. And yet, we have a strong motivation to continue our artistic research. We would like to share its audible results with you.